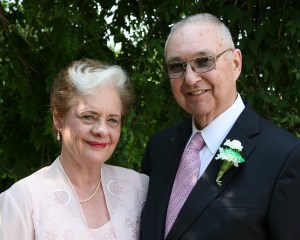 Just when you thought 2010 was going to be an “OK” year, something happens that shakes you away from that idea. We found out that Niki’s father Ted passed away this morning. He was 71 years old and was a very nice man. He was a very great man, quiet and humble despite his size. I will miss him greatly, but not as much as Niki and her sister Nancee will. There’s something special about being one of “Daddy’s girls” and I really feel their hurt in the fact that their “Daddy” is gone – but never forgotten.

Theodore Christian Nielsen (1/1/1939 – 2/2/2010)
Cherished Husband and Father passed away suddenly on February
2, 2010. Born January 1, 1939 in Douglas, Michigan, Ted served his friends and
neighbors throughout his entire life. He served in the United States Army
overseas before coming back to marry his sweetheart Anita Wolters.
He continued to support his community by serving in the Saugatuck Police
Department and by working in the Saugatuck Public Schools, retiring from there
in 2004. Not willing to sit idle, Ted looked to help others by volunteering at
Christian Neighbors in their food pantry. He also remained active with the
Saugatuck Masonic Temple #328 throughout most of his life. He leaves behind
Anita, his wife of 48 years; two daughters – Niki (David) Worthams of Kalamazoo,
MI and Nancee (Michael) Hutchinson of Fort Wayne, IN; one granddaughter
(Cristiana); one step-grandson (Alex); mother-in-law Ruby Wolters sisters-in-law
Carole Wolters and Sally (David) Nye, and many dear friends. In respect of Ted’s
wishes, he has already been cremated. In lieu of flowers, the family asks that
donations be given to the Saugatuck Masonic Lodge #328 or Christian Neighbors in Douglas, MI. Arrangements are by the Dykstra Life Story Funeral Homes-Saugatuck Chapel. For more information and an online registry, visit www.lifestorynet.com