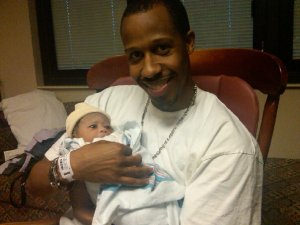 Seems like the month of May is going to be full of thoughts about brothers. I didn’t get a chance to post when it happened, but I became an Uncle this month – if you can believe that.

OK, first some background. I am the only child of Quinton Worthams and Ernesta Whitlock. My parents were married for about five years or so and shortly after I was born in ’74, they divorced. Mom brought me back from L.A. to live with my Grandma and Grandpa in Kalamazoo. Dad stayed out there where he re-married and had three children with Cristina Worthams. My half-siblings are (in order of age), Quinton Jr, Robert, and Jennifer.

We lost Jennifer in a tragic car accident in Atlanta last October and Dad asked me to attend both the services in Atlanta and in L.A. During that time, I got to know my little brother and realized that we have a pretty big bond. Robert lives in the Washington, DC area and I hope that when I go on lobbying trips to DC, I’ll be able to catch up with him and his wife Nailah.

I started thinking about Robert and RJ on my way home from work tonight. As always I was listening to the iPod and Toad the Wet Sprocket’s “Brother” came on. On the version that I have, Glenn Phillips (lead singer) says “You know, I never wrote a song with the words ‘I love you’ until I wrote a song about a man. This one is for my brother because I love him.” Here’s the video for those who would like to hear the song:

Well, here’s to those of us who love our brothers … especially the ones that we have had a second chance to get to know again. Congrats RDW and Ms. Naliah – and welcome to the Big Blue Marble, Mr. Robert, Jr!

One thought on “Speaking of Brothers”