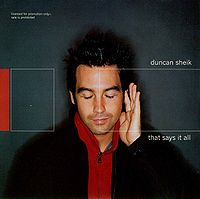 I hate waiting … patience is not anywhere close to being a virtue of mine. Just ask Niki about the various levels of trickery involved with the hiding of birthday and Christmas presents. There are times I’m almost as bad as Alex in wanting to open presents on Christmas Eve (or sometimes the week before Christmas).

At any rate, I’m waiting on someone to give me a response to a question/offer I posed to them about three weeks ago. I’d tell you more specifics about it, but probably shouldn’t in the event that this blog takes off with more followers.

Speaking of that – thanks Ms. Clock for following! 😉

Back to the topic. I’ve created a new playlist on my Ipod to listen to on my commutes to/from work titled “Meditations“. It was initially called “Jaycee Meditations (Good and Bad)” but I figured that was too petty. I just have to keep reminding myself that there’s the real world that matters … and then there’s the frickin’ frackin’ Jaycees.

One of the songs in the playlist is by Duncan Sheik called “That Says It All” from his second album Humming. Sheik wrote the song as a tribute to some of his musical influences. I like it because of the last few lines of the song (which I’ll put in bold). Enjoy!

Hit the town, still dressing down
Looking for some action
Mr. Jagger said it best
He knows you never get…no satisfaction
But Mr. Dylan knows
That everyone is more or less a rolling stone
And Mr. Lennon, so quiet, knows better or so I’ve been told

That says it all, doesn’t it?
We always want what we never get
Well listen here, my friend
I can’t continue to pretend that it’s alright
‘Cause that ain’t right…That ain’t right

I hear you’re gonna make it big, rake it in
With your master plan, Mr. Hendrix understood
Those are only castles made of sand
Mr. Wilson took some pills…and I don’t blame him
It’s hard to be alive…Mr. Page, how he played
Mr. Drake stayed up late and made me cry

That says it all, doesn’t it?
We always want what we never get
Well listen here, my friend
I can’t continue to pretend that it’s alright

They’ve said it all haven’t they?
But what I want, what I want to say
Is listen here my friend
I can’t continue to pretend that it’s alright
No matter what we get
We never find our happiness
Ain’t that a crime? Maybe that’s why I’ve been told
Since I was six years old to compromise
But that ain’t right…That ain’t right

Maybe I’ll use this in a fellowship breakfast speech before the end of the year! 😉